The growth of the Canadian economy began to slow around 2000 and has stayed relatively constant at around the level reached in 2008. Growth rates today are similar to the rate of the growth of the population plus growth in public debt. What growth there is lags the United States, our closest comparator by a wide margin, as can be seen below (OECD data). This article briefly shows the prevailing economic condition of Canada, the need for growth, why consumers should be put first, and why Canada needs to become a global platform for speculation. 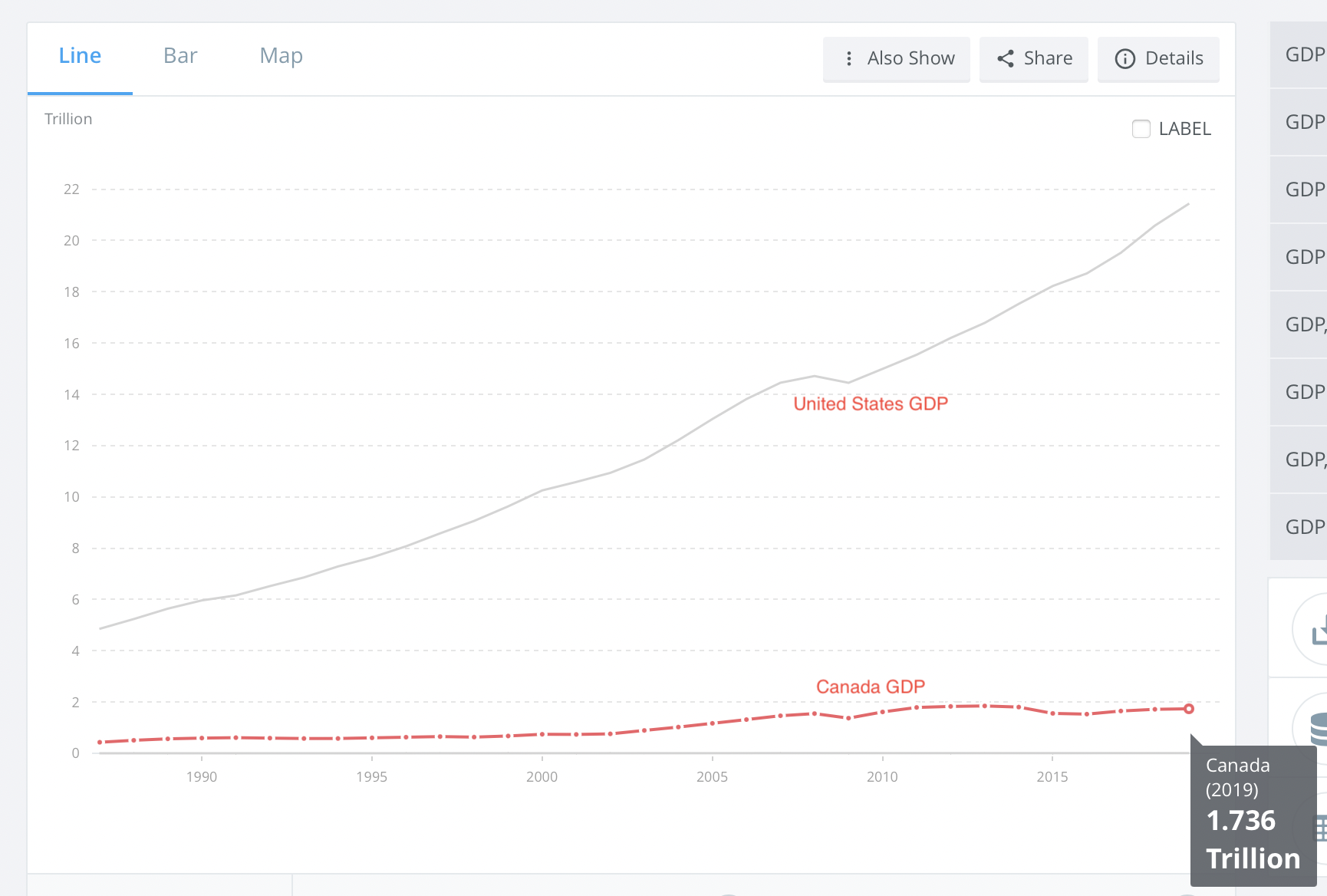 Net debt per capita since the financial crisis in 2008 has doubled, which has created the appearance of debt but this is the kind of growth that needs to be paid off later. Some people are of the view that debt never needs to be paid off, but that's not the understanding of the parties that Canada borrowed that money from. 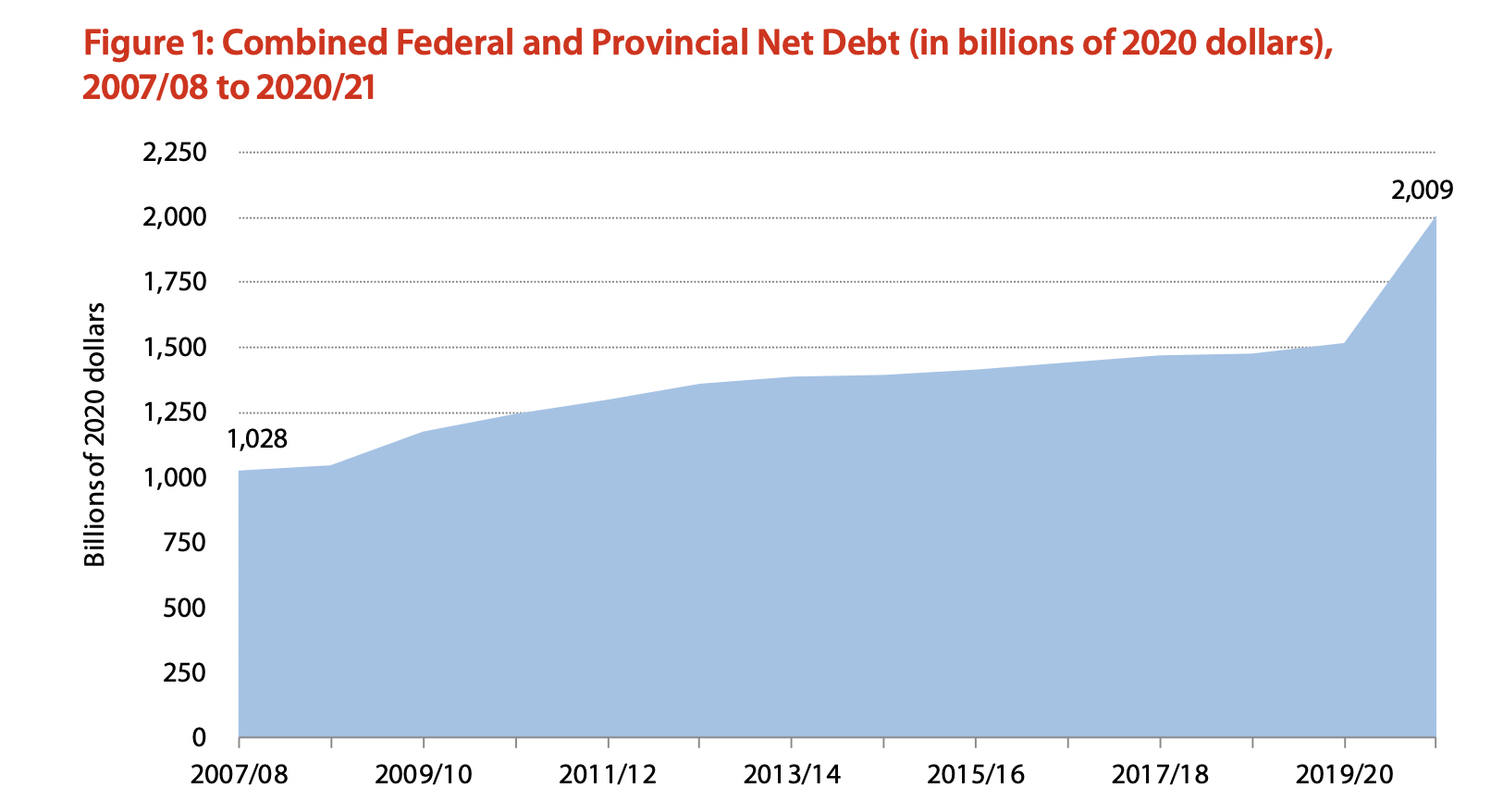 In the same period of time that debt has skyrocketed, growth has stalled. Not since 2007 has Canada experienced GDP growth per capita of greater than 2.5% and in 2015 and 2016 growth was actually negative. 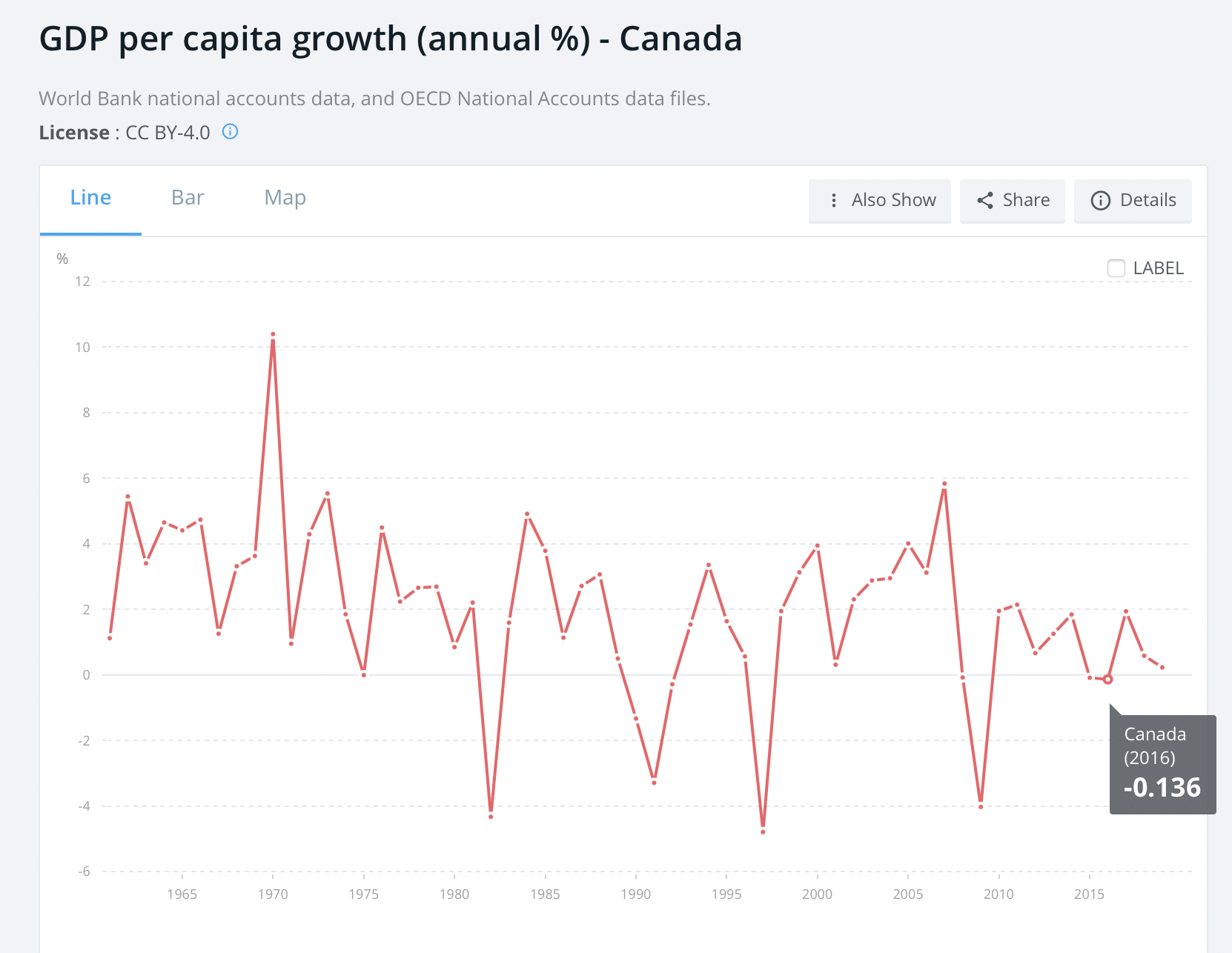 But these are just charts and statistics. What's the opinion of highly paid professionals who have carefully studied the long term growth prospects?

The Ontario Teacher's Pension Plan has steadily reduced their growth expectations since 2011 from 3.25% real growth to 2.45% real growth. Growth rates are not likely to increase unless there is a significant change such as a ground-breaking new technology (like personal computers and the Internet in the 80s and 90s) or a huge expansion in global trade (like the rise of China). And as growth slows it will become ever more difficult to increase growth, even with big increases in debt or unusual interventions from the Bank of Canada like we've seen over the last year. Growth is low and likely to remain low. And when the environmental destruction and human cost over the last many decades are factored into the growth picture, growth may very well be negative because GDP doesn't factor in environmental damage or social cost. If climate change is ever seriously tackled in Canada we can expect an even steeper reduction in growth over time.

How To Get Growth

The public wants growth. People want to be able to invest for the future and earn a good return. They may also be depending on growth for retirement, which is largely self-funded in Canada. So how can growth be delivered? Reforming Canada's approach to the Law of Speculation is a key piece of this answer.

The decline in new issuers and initial public offerings in Ontario is alarming. 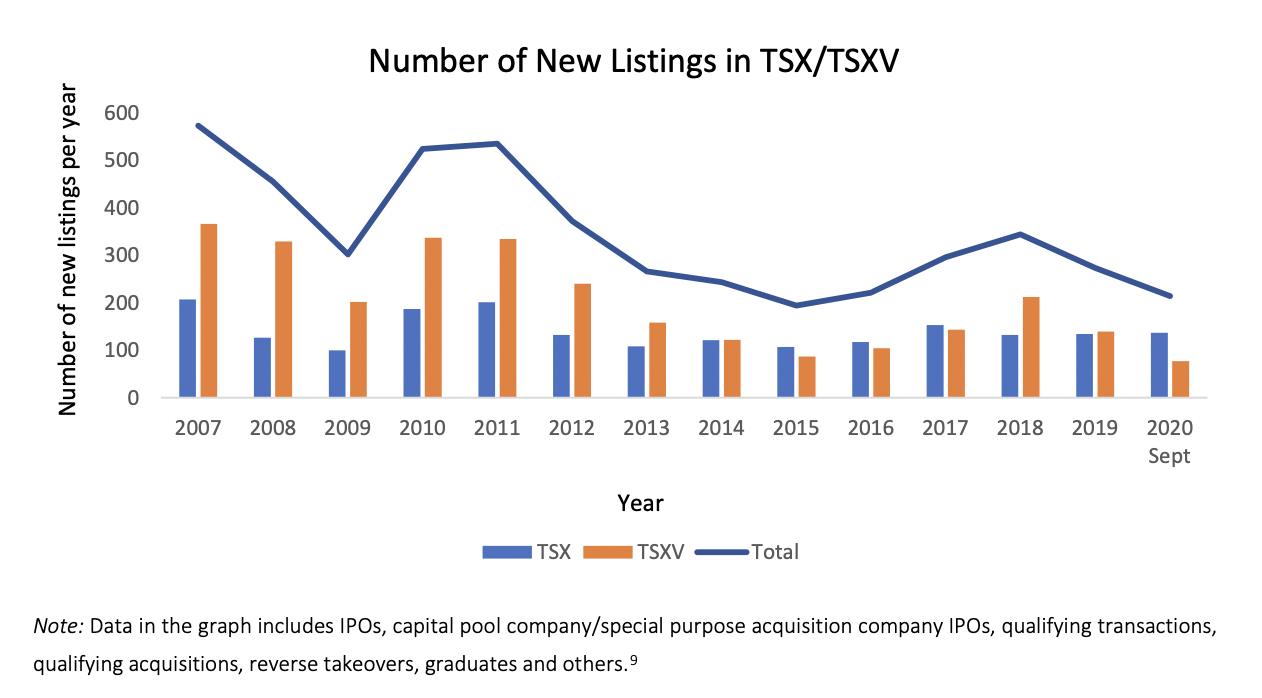 Investment management should be a boring, low-margin, highly competitive business. Yet too many Canadians invest through products like mutual funds that are far less efficient than other options like ETFs. The Canadian investment environment is one that is not established with growth and investment at its core, and it is not consumer-oriented. A visit to the website of any regulator in this area will quickly show the public who's important: industry players and government. For example, scroll down the page on the Ontario Securities Commission to "Find what you're looking for" and you'll see "Investors" last.

But reforming the Law of Speculation isn't just about putting investors first (reducing costs & improving returns) or improving growth (by fostering a better investment climate). It's also about enforcing laws. Enormous numbers of people are the victims of investment scams, largely perpetrated by overseas criminals. Our disparate regulatory system in Canada and lack of concern for enforcement against criminals has led to billions in losses. This is hardly a unique problem to Canada (re: Bernie Madoff in the US) but it's one that is solvable with a modern approach. The criminals have gone digital but our government hasn't.

The number one goal though should be to capture the global market. The Law of Speculation in Canada must be reformed to put Canada at the center of the world's financial flows by creating a better environment for gambling, insurance, investment, trading, and entertainment products (e-Sports). In a world of declining growth, just like a declining local market, the answer is to take market share. Canada's laws currently contemplate a local market and are largely set up to prevent Canada's markets from interacting with the world (which doesn't have the same regulatory "compatibility" because our laws are unique). The only way to dramatically improve Canada's growth rate is to become a world center for the new online business environment. People no longer trade stocks with the brokerage that has the biggest billboards. People no longer buy from their local stores. They buy from Amazon, they buy from online Etsy sellers in Lithuania, and they buy stocks from companies that put their ad money into building better user interfaces.

Yet our regulators seem to be of the view that if only the world could stay the same then everything will be fine. Rules are rarely changed. Regulators rarely expose their inner workings to the public. Amazingly, almost all investment, gambling and insurance laws predate the Internet and the rise of global trade. The insurance industry today follows rules very similar to that of 50 years ago. The underlying software systems used by major banks and brokerages are often pre-Millenium.

Due to Canada's size, history, languages, and foreign connections it is well positioned to reorient towards becoming an investment platform for the global world. There's already a great head start on this in the world of mining financing, and our many outwardly facing export industries. It's time to redesign the system to build exports. This reorientation doesn't need subsidies (which wouldn't work anyway), it just needs a new operating system, a new regulatory system for the Law of Speculation. Part 3 of this article series discusses a few new kinds of products and structures that would be enabled by reform.

Next: The Law of Speculation: Part 1 ► Blog Home