January 11th, 2021 Is MCMA The Future Of Banking and Wealth Management? (Multi-Currency, Multi-Asset) 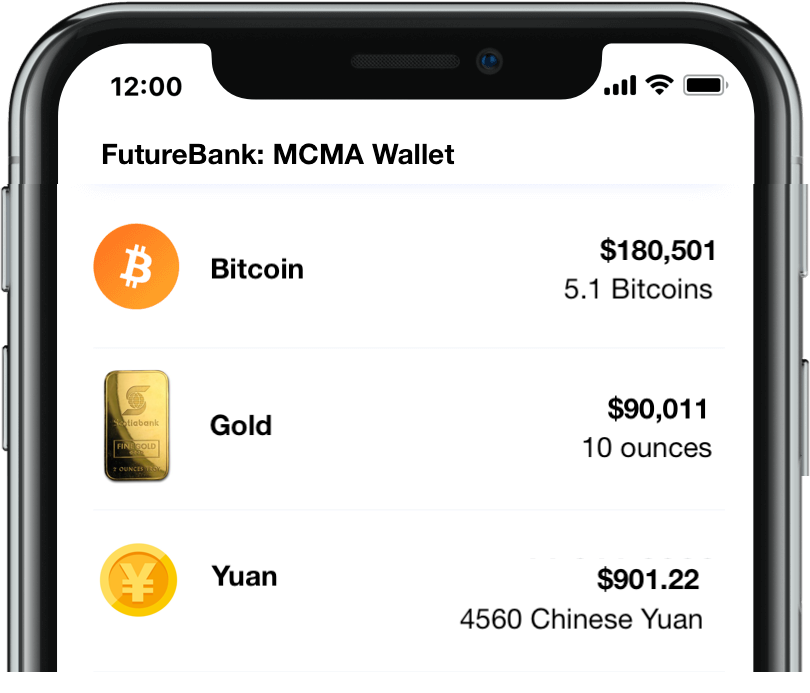 MCMA holds the promise of a world in which wealth management is diversified, cheap, and algorithmically driven. Imagine an app that allows you to allocate your money the way billionaires do, in a variety of different assets, and according to a professional, free strategy by a famous advisor.

This article spells out what MCMA is and how it might merge the worlds of currency and investment. The article begins with a look at how people manage their money today and why that might change. MCMA will be driven by global trends like cheap foreign exchange transactions, stablecoins, global diversification, digitization, Open Banking, roboadvisors, precious metals tokens, and convergence of financial services.

If you're like most people, you bank in a single currency. But there's no technical reason why you can't bank in multiple currencies, investments, or digital assets like cryptocurrency. In the same way that many cryptocurrency applications show Bitcoin and Ethereum, or bank accounts that show CAD and USD, an account could be created that shows a wide variety of units of account, according to the holder's intention. With new innovations in stablecoins, there may soon come a time when users can just as easily manage their money priced in gold, silver, bitcoin, Japanese Yen, Swiss Francs and Canadian Dollars. These services are already available for multiple currencies (see Transferwise below), and the next step in the evolution of this market is to offer an even broader range of units of account.

In a world of digital assets, and digital representations of offline assets, I should have one account to move my wealth between Canadian Dollars, gold, silver, Bitcoin, or even real estate in a specific region. Securitization, tokenization, and regulatory innovations will eventually smooth over the different regulatory regimes to provide a clean user interface that customers can understand. This kind of interface could also be used globally, potentially aiding Open Banking efforts. This would also allow banks to become more relevant to the increasing numbers of people using securities dealer accounts to manage their money, cryptocurrency to store their wealth, and online foreign exchange services to swap currencies.

Or perhaps the future of MCMA is not banks, but non-bank fintechs that operate underneath the appropriate licenses. There are now specialty banks that serve the needs of companies in the "layer" above the bank so that they operate the underlying financial infrastructure but not the customer relationship & interface. An example of this kind of bank is Cross River in the United States, which provides services to Coinbase (cryptocurrency), and novel consumer finance services like Affirm (which will IPO soon for ~$1 billion).

The currency you use is typically the national currency of where you live, but it's often not the native currency for the goods you buy, which are priced in EUR, USD, Yuan, or Yen. For consumers, different currencies are smoothed over by local vendors who take on currency risk or credit card foreign exchange services.

Single currency accounts make sense in a world of local transactions, restrictions on foreign exchange transactions, and reliable currency prices (i.e. low inflation, low volatility, etc.). They expose holders of currency to some risk (CAD/USD exchange rate has fluctuated by about 20% over the last few years) but it's generally not noticed by the public unless the holder lives in a country with a particularly volatile currency like Argentina or Venezuela, or there is a sudden financial crisis.

Foreign Exchange and Multi-Currency on Transferwise

Foreign exchange is a highly competitive market. The prices charged on a credit card when you're on vacation are far in excess of the actual cost of the service. Major corporations pay far less, but even consumer can access much lower prices using new services like Transferwise. Transferwise offers rates in the realm of 0.5%. But the more interesting offering of Transferwise is a multi-currency account that can maintain balances in 50 currencies.

The United States Office of the Comptroller of the Currency recently issued guidance that explicitly endorses the use of "stablecoins" for payment activities and "other bank-permissible features": https://www.occ.treas.gov/news-issuances/news-releases/2021/nr-occ-2021-2.html. The stablecoins that they're referring to are typically blockchain-based systems run by a private company. This is a major step forward in the acceptance of a wider range of ways to interact with dollars. Stablecoins are essentially dollars wrapped by blockchain technology, often structured using a trust system like the NYDFS limited purpose trust company license in New York State. Canada's market is less robust, but has its own version of this concept: QCAD. Across the world there are now dozens of significant stablecoin projects, with new ones coming online every day.

Dollar ("fiat") stablecoins are a multibillion market that's now entering the mainstream through regulatory endorsement, but the same approach can be taken for other kinds of assets. For example, Paxos Gold is a gold-based stablecoin that runs on the Ethereum network.

What would it take to bring about an MCMA product? Transferwise is already doing it for national currencies. Most cryptocurrency wallets support many tokens and coins. Free stock trading app Robinhood offers securities and "cash management". It's not likely that future products will have less integrated offerings, and global economic uncertainty may drive some people to start holding a diverse set of currencies and assets, instead of keeping their savings in their local currency.

The easiest path for MCMA is likely stablecoins. Stablecoins (both national currency and asset-backed) are improving quickly and already offer a method of gaining exposure to a variety of assets that they track. A cryptocurrency-based wallet that offers many stablecoins would look a lot like my MCMA mockup at the top of this article. If the consumer demand is there (and billions of dollars of stablecoins trade hands every day right now), larger players will follow and more innovation will occur in the world of converting real world physical assets into digital representations that can be managed through a common user interface.

Diversification and choice of risk are key benefits of MCMA. By "choice of risk" I mean choosing a level of risk of a unit of account deliberately, as opposed to accepting the default national currency choice. Some people prefer less volatile currencies and assets, whereas others prefer more, or have specific risks that they want to address. For example, holding an account in Ghanaian Cedis instead of Canadian Dollars is a way of choosing the risk that West Africa will grow faster than Canada. But an even bigger advantage will become apparent if MCMA takes off.

MCMA offers the prospect of having algorithmic trading and balancing at no cost. In an MCMA environment I can choose to follow specific people's advice (in the form of algorithms) such as picking Warren Buffet's currency allocation, or Masayoshi Son's approach to precious metals vs. dollars. Undoubtedly in a globally competitive market there would be many models to pick from which would be made available at no cost to promote other products, books, or the many other motivations people have for posting insights on today's social media platform's. Others might choose to charge, but if they did, these charges would be far, far less than what in-person financial advisors charge.

The Pieces Are Being Built

The pieces of MCMA are being built right now. There is a steady trend toward lower prices, less friction between assets, easier interfaces, better banking, and cross-border business. These pieces will slowly converge on MCMA wallets and the convergence will be so gradual that most customers won't notice. In a way, MCMA is already possible with many banks that offer integrated banking in two or more currencies plus investments. It's really a matter of degree, and globalization. Standardization of MCMA assets and management will likely happen over time, similar to Ethereum tokens converging on the ERC20 standard without coordination.

I expect MCMCA to be built from four sides: banking, foreign currency exchange, investment accounts, and cryptocurrency/stablecoins. As the players in their respective fields become larger they'll inevitably try to expand their services and keep customers within their orbit by offering what they're asking for. I've heard from many wealth management professionals that their clients have been asking for Bitcoin as a part of their portfolios for years. Many customers prefer to deal with people they already have a business relationship with, and the trend of apps is toward simplicity.

No one has ever asked for their wealth to be split among a dozen different products and entities - unification is almost always what consumers want. People's lives are complicated and they want simple solutions that address their needs. MCMA is one way this can be solved.