The Ontario Securities Commission (OSC) put out a report on their survey of cryptocurrency use a few days ago. The survey shows that 13% of Cannadians own cryptocurrency (or cryptocurrency-based securities such as ETFs), Canadians have made huge gains on crypto (pg. 20 of the survey), and a quarter of trading platform users make use of VPNs.

The OSC concluded that their survey shows Canadians aren't knowledgeable about crypto, but if anything the survey shows that they need to carefully think about terms and definitions. Cryptocurrency is hard to understand but the questions posed to test the public's knowledge say more about the OSC than about Canadians.

The OSC's Test Of Crypto Knowledge

Below I've explained why these answers are less than obviously right, and then later on in this post a few other parts of the survey are discussed.

The first question asks whether crypto assets allow for direct transactions between two parties, without a third party.

If someone is using an exchange or a dealer, then obviously they would answer no. In that sense, a crypto asset relies on a third party (and the third party is providing an essential part of the service). This is the case for most people who are looking to buy cryptocurrency or sell for cash, because most Canadians aren't equipped to do P2P sales like that.

In the early days of cryptocurrency it was common for people to meet in coffee shops to buy or sell, but as the market has matured, people find intermediaries far more useful. And in today's world of anti-money laundering regulation and now Ontario Securities Commission regulation (of restricted dealers), a crypto asset transaction very often involves a third party. The 11% of people who answered that a third party must be involved might be thinking of the cryptocurrency dealers and exchanges that are liberally discussed in the rest of the report.

The second question asks whether cryptocurrency transactions are instantaneous.

If someone is trading on a platform, the transaction can be carried out instantaneously because these services are generally geared to high-speed trading. But even an off-platform, P2P transaction will be effectively instantaneous. Ethereum and Bitcoin transactions can be viewed (as pending transactions) on block explorers everywhere in the world within seconds of being sent. They confirm in anywhere from 30 seconds to an hour, depending on the network and fee, but it's not so clear that the confirmation time is what's important, since the receiver can see the transaction immediately (but can't rely on it completely until several confirmations).

The OSC says the answer is that no, transactions do not take place instantaneously but platform-based transactions certainly do, and I would say a few seconds is effectively instantaneous. It can take just as long to load a large PDF from the OSC's website as it does to broadcast and view a blockchain transaction. One of the core benefits of cryptocurrency has always been how fast these systems are (especially compared to multi-day wire transfers or two day settlement stock trades), so it's odd that the OSC thinks the answer is that no, transactions are not instantaneous. They are probably thinking of confirmation times for blocks, and perhaps thinking of Bitcoin in particular, but it's still quite fast.

The third question asks the survey respondent whether all crypto asset transactions are recorded on a distributed ledger that is publicly accessible.

The OSC says the right answer is true, but it's not true for many kinds of crypto asset transactions. Most transactions on platforms don't result in immediate on-chain ledger entries. There's even an OSC staff notice about this that was issued in 2020.

There are also private blockchains such as the Bank of Canada's experiment titled Project Jasper. No wonder respondents overwhelmingly answered that they don't know. That's a good answer! But it would also be reasonable to say that the right answer to this question is false, not all transactions are publicly accesible.

The OSC's fourth question asks whether crypto assets are secure from cyberattacks.

Surprisingly, the OSC identifies the correct answer as false, that crypto assets are not safe from cyber attacks. Considering Bitcoin and Ethereum are some of the most secure systems every created, with billions of dollars available to the first hacker who can figure out how to steal from them, that's a bold claim! But obviously the OSC doesn't mean the core technologies, they must mean either programs running on Ethereum (tokens or smart contract systems) or perhaps they mean the platforms that trade them (a common source of hacking).

Most respondents provided the same answer as the OSC but this question is a great example of the kind of confusion of terminology that can occur in this space. But it's also a question of what computer security means. Ethereum hasn't been hacked, but many programs running on Ethereum have. Properly secured, using appropriate best practices, it really is possible to secure cryptocurrency in a way that most other assets can't be, because they are tied to a private key (rather than relying on human security or physical locks).

Backed By The Government

The final question asks whether crypto assets are backed by the government. The answer is no. A reader might be a bit confused in that the OSC has a regulatory regime for crypto asset trading platforms, and the Department of Finance oversees the anti-money laundering side of virtual currency dealers, but this isn't backing crypto assets per se. Although it wouldn't surprise me to find out that most Canadians view a significant regulatory scheme that manages an industry as a type of backing of that industry. It's quite a nuanced definition of backing to say that it means only financially backstopped (which is what the question is asking about). Many industries in Canada aren't explicitly indemnified by the government against losses but they receive bailouts or preferential treatment when times are tough. That's not likely to happen with cryptocurrency businesses today because they lack political power, but as the regulatory systems integrate crypto assets into existing systems, it's not unthinkable. And a reasonable person might think that the same protection that applies to securities dealers also applies to restricted dealers of cryptocurrency.

Considering how confusing the questions were, and that most questions could easily be answered both ways and still not be wrong, it's not surprising that the OSC concludes that Canadians have low literacy when it comes to cryptocurrency. But this really says more about the people asking the questions than the respondents.

What Canadians Said About The Ontario Securities Commission

When it comes to Canadians, the thing they really don't know is what the OSC does. Only 3% of respondents identified the OSC as a regulator of crypto assets (pg. 31). 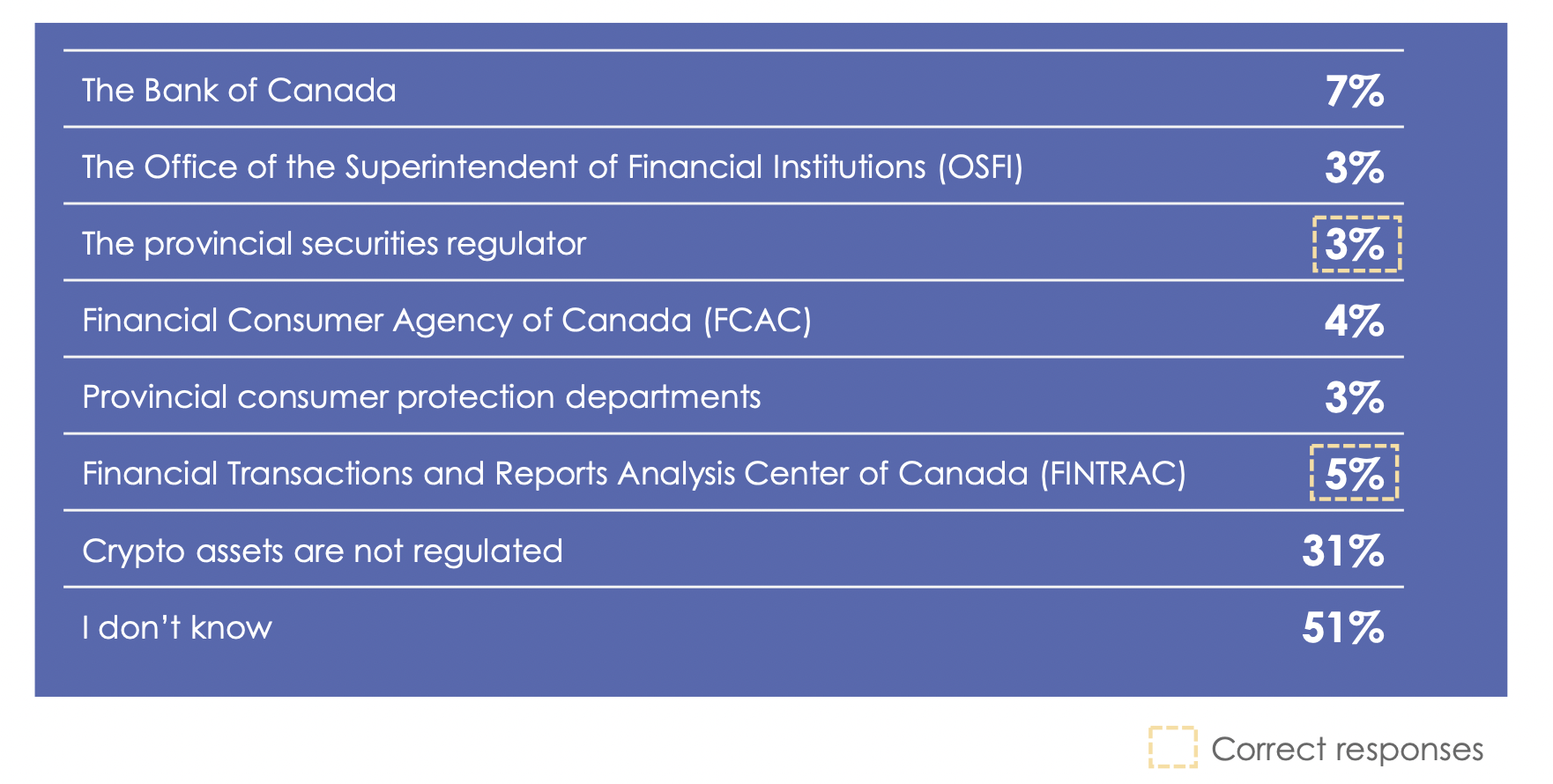 Page 69 of the survey surprised me: one quarter of users access crypto asset trading platforms using VPNs. That's much higher than I would have guessed and shows a surprising degree of sophistication.

The OSC's confusing questions don't just extend to cryptocurrency. The survey also asks tricky questions like whether a single stock is less risky than a mutual fund. Experts agree that mutual funds are a rip-off, and the costs of the mutual fund make them less efficient than the underlying assets. The advantage is convenience (and high fees for those who sell them) but it's not safer than buying the underlying portfolio. Stocks aren't really less or more safe, because the prices tend to reflect the level of risk and reward. There are stocks that will suffer less variance or less risk of loss but that comes with a reduction in the potential gains, which will jeopardize the investment returns that justify the investment in the first place. I would obviously answer false, but I don't think the OSC should be promoting the view that mutual funds have safer returns than individual stocks. The other questions asked don't suffer from this potential confusion. And given that the OSC is supposed to be a regulator that specializes in nuance, it's important not to dismiss Canadian's knowledge on the basis of questios that don't have clear answers. 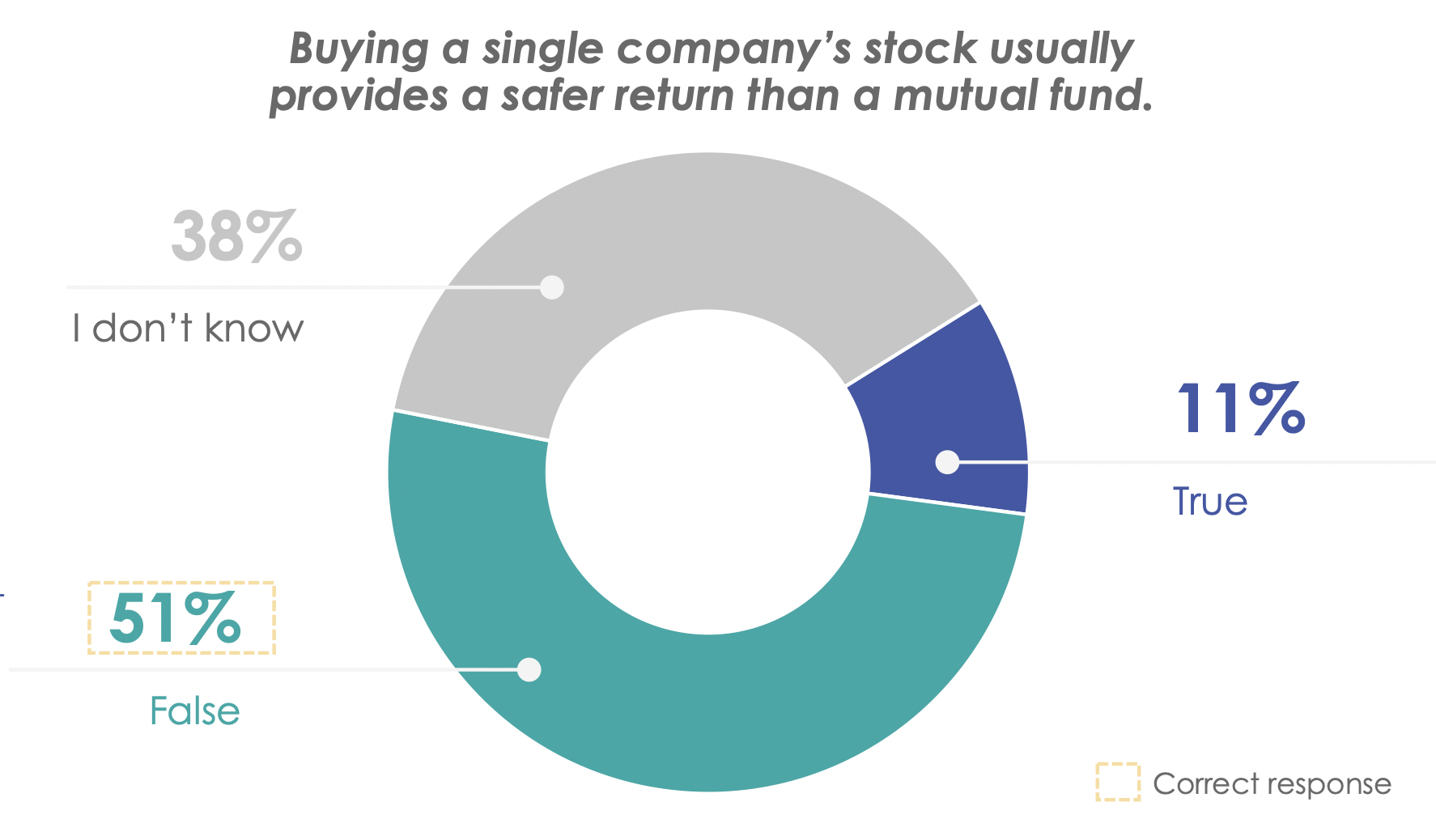 Before criticizing Canadians for having low literacy when it comes to finance and cryptocurrency, the OSC should take care to ask questions that have clear answers. Otherwise, the only thing that is being tested is whether you can create questions that show people have low literacy.

Despite having worked in this industry for many years, I'm surprised to see how high the numbers are for Canadians' use of cryptocurrency. 13% of people are current owners and another 8% used to be. Although 78% of Canadians have never been owners, it's shocking to see such rapid adoption of a novel asset class. Despite the OSC's conclusion of low literacy when it comes to crypto, it seems many Canadians not only know about it, they're becoming owners.

Ownership is conviction, and even if that conviction isn't based on an encylcopedic knowledge of skill-testing questinos about digital ledger technology, Canadians certainly know about crypto in 2022. A survey like this would have sounded like science fiction back in 2014 when Ethereum first got started. Satoshi Nakamoto, whoever they are, would be proud of the progress that their ideas have made in spreading throughout Canada.

Next: OpenAI's DALL-E: Not Quite Ready For This Blog Yet ► Blog Home