Let's say I have a company that sells gravel in Canada. I buy gravel wholesale for $500 per ton then sell it retail at $1000 a ton. I make approximately $500 per ton in profit. That means I would have to pay corporate tax on the $500 per ton in profit (assuming I had no other costs). What if I set up an offshore subsidiary (e.g. Cayman Islands) that buys the gravel from my supplier for $500 per ton then sells it to me for $1000 per ton and then I sell it to the customer for $1000 per ton? If that were possible, I'd effectively shift the profit I make from gravel sales from Canada to a no-tax offshore country and thus escape corporate tax while still making just as much money (and if I had any other costs, I'd then have a loss that I could apply to past year's gains).

"Transfer pricing" is the term given to the price set between related entities (e.g. a Canadian company and its Cayman Islands subsidiary). The rules for how companies can set their prices internally are complicated but attempt to stop would-be tax cheats from moving profit from one country (that has taxes) to another country (that doesn't, or has very low taxes). A key principle is that the price that a company should pay to its subsidiary is the price that they would pay an "arms-length" company. This principle is hard to apply and the rules create opportunities to pay very little tax on very large sales.

Canada has its own multinational companies that love transfer pricing and don't like paying corporate taxes.

In 2012 the Supreme Court of Canada ruled on drug company GlaxoSmithKline's (GSK) tax structure related to sales of a drug called Ranitidine in 1990-1993 (i.e. more than twenty years prior to the case).

The gist of GSK's tax structure was that they imported ranitidine (the active ingredient in their drug) for $1512-$1651 per kilogram from a Swiss company (also run by GSK) which in turn purchased from a Singapore company (also run by GSK). Other competing Canadian drug companies paid $194-304 per kilogram for ranitidine. The effect of this manoeuvre was to increase GSK's cost of goods sold and thus pay less Canadian corporate taxes than they would have if they had purchased ranitidine from the world market. What makes this different from my gravel example is is that they paid for very expensive ranitidine but also got access to intellectual property. The details are far too complex for this blog post but are worthwhile reading for anyone who'd like to know more about the inner workings of multinational tax planning. The 2008 Tax Court of Canada ruling has many more facts than the SCC decision. 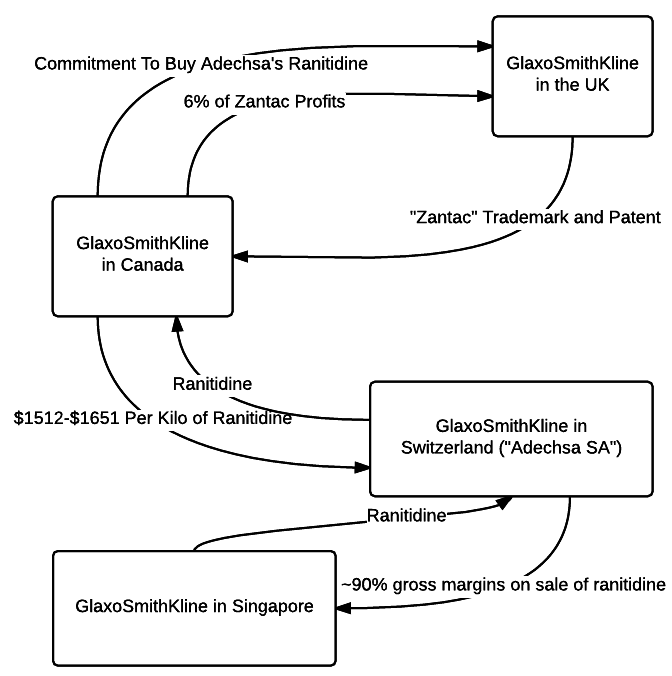 In the United States, GSK paid a $3.4 billion settlement with the IRS for their arrangement involving ranitidine and low-tax domiciled subsidiaries.

The Supreme Court didn't provide a final disposition of the GSK case (although it was mostly a win for GSK), instead they sent the case back to the Tax Court for further consideration. Just before the case was scheduled to be heard in early 2015 the Canadian government and GSK settled. The details will not be released to the public.