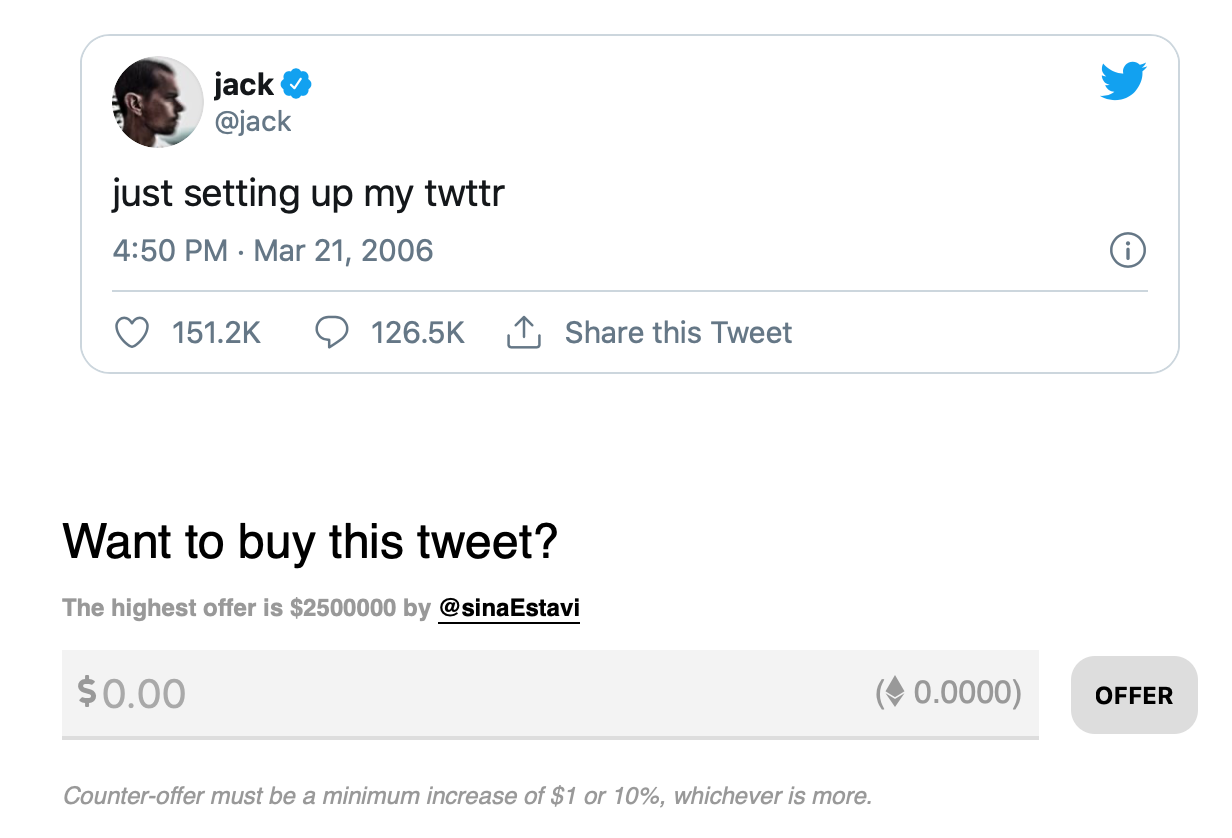 Jack Dorsey, the co-founder of Twitter, is selling his first tweet and the current highest bid is $2.5 million USD. Is the start of a new art of capitalism?

There's no agreed definition of art but surely the process of selling a tweet to someone in a public manner is a performance, and performances have long qualified as art. Can't the process of selling the tweet be the art itself, and the non-fungible token (NFT) that came with it the proof the art? And in a highly capitalist society, doesn't it make sense that a billionaire selling their tweet would be a valuable form of art?

Jack Dorsey is a famous man who is not commonly known as an artist. His art, which relates to what he is famous for (Twitter), is something that can obviously be art. And isn't the NFT and the process of selling it just as much art as a painting being shredded (Banksky's Girl With a Balloon) or burning money (K Foundation Burn A Million Quid)? Is it surprising that a famous rich person could create performance art and sell it for millions? Doesn't it make sense? And isn't his fame and wealth a key aspect of the value of the work?

NFTs are also being explored in the rights management context, where the NFT is not just proof of the art, but also proof of ownership (or is the ownership itself.) There are also a number of digital art projects using NFTs. Many wonder about the value of NFTs since they're digital (but not ephemereal) and not a canvas hanging in a museum. But NFTs are really a neutral base upon which artists can build their art. NFTs are the logical next step as blockchains continue to find new use cases, and the combination of art with instant global payments (e.g. ETH transactions) is surely a powerful new trend.

With this new approach to art also comes new opportunities for artists to monetize their works on a longer time horizon by receiving a cut of future resales. This has not been the traditional model for art. But if art migrates to platforms where artists receive a portion of future sales, there may be new opportunities for art production and even new models of art. The value of art is typically created by the artist and the audience, but in the new digital realm there is a possibility for even greater collaboration and interaction between the audience and the artist. Through the Internet and new technological approaches like NFTs we may end up with new forms of art that are conversational, rather than simply hanging in a museum.

Is Jack Dorsey now an artist? Does it matter that the buyer of his NFT art is the owner of the performance that was free for everyone to watch though media stories last week? Is it a problem if everyone can enjoy the art but a single person owns it? Will other wealthy tech executives also move to creating performance art? How might this new concept empower new forms of art and new methods of monetization for creators? Do we need to start thinking about a new type of intellectual property for performances, or do the existing categories of intellectual property cover this ground?

I'm looking forward to seeing the rapid evolution in this space start answering these questions.

Next: Is MCMA The Future Of Banking and Wealth Manage... ► Blog Home