October 30th, 2020 Luxury Brands Have Embraced Blockchain, Can It Be Done For The Environment? 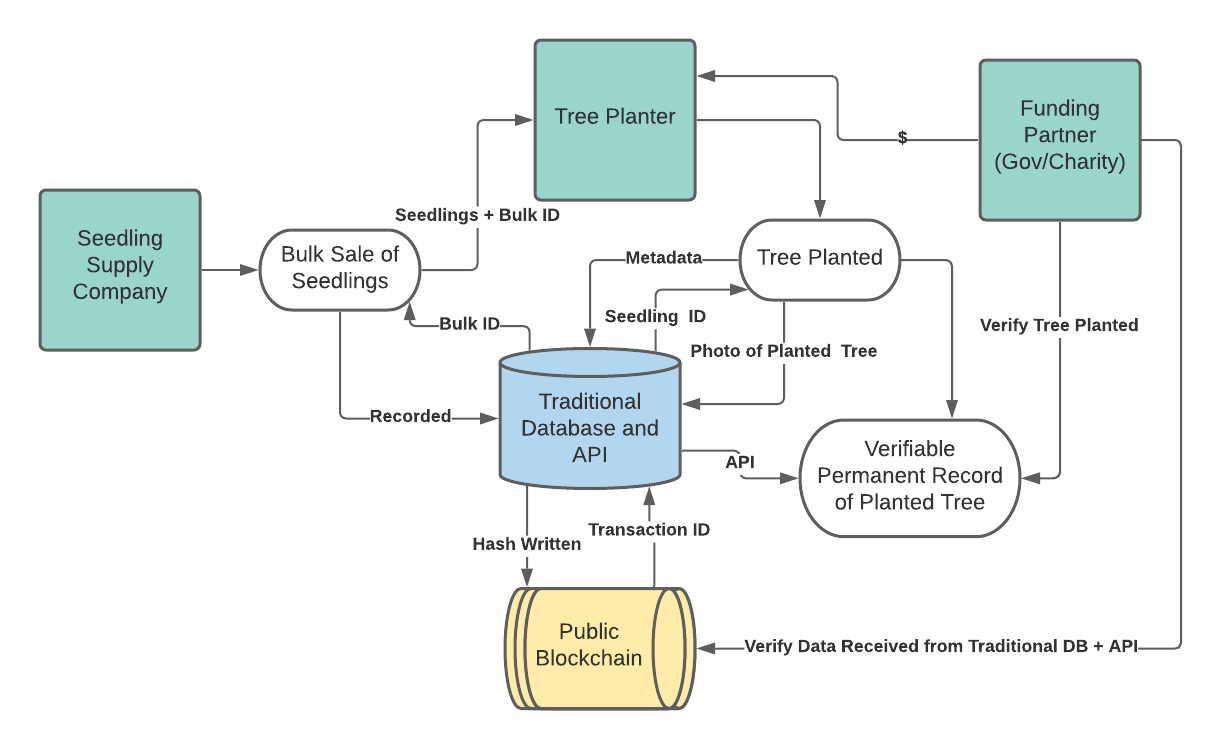 Luxury brands like Breitling and Louis Vuitton have embraced the use of blockchain technology for anti-counterfeiting purposes. These approaches are now mature enough that, in conjunction with IoT and stablecoins, they could provide significant benefits for environmental initiatives. This article explains how these disparate technologies could be turned into real action that can increase public faith in environment-driven projects like carbon trading.

Luxury brands have been heavy investors in new blockchain-based technologies for assuring supply chain integrity. The basic approach is to have several data points added to an append-only blockchain so that records can't be forged after the fact, and customers are given an interface to be able to view the data and verify that the goods in their possession have a chain of custody. Low-cost IoT devices now permit automated registration of data, similar to package tracking.

If I donate to planting a tree, how can I know that it happened? The tree planters could send me a photo but how would I know that's the right tree? If the tree photos were entered into an online database with each one being hashed and then registered on a public blockchain, I could be very confident that the millions of photos are for unique trees, and each one could be accompanied by the photo with GPS metadata. This can be automated in the same way that some municipalities have adopted photos as part of parking enforcement. The key change is registering the data in a public database (that's not on a blockchain) along with blockchain entries that provide an immutable record that the public database record was added at the time it said it was and hasn't been changed since. This can be done today, largely using off-the-shelf software.

The next step beyond registration of data is to provide for payments that are linked to the blockchain data. Rather than me putting up $100 to plant trees before it happens, I could place $100 into a system that pays out the money only as the trees are planted, or only once the seedlings are ordered (and registered). Adding additional data points permits more confidence in the data and provides new opportunities for donors and financiers to enter the process at their preferred point. Some people might want to fund trees after planting and others might prefer to pay beforehand, or even a third-party finance company offering a bridge between the pre-planting and donor payment upon photo. New data recording systems create new opportunities, and the digital nature of these systems turns high ongoing costs into an upfront cost with minimal ongoing charges. Software systems are often rather expensive to build but nearly free to operate.

Using smart contracts and stablecoins, a system could be developed to automatically pay out when certain milestones are reached. An environmental charity might provide $100,000 in QCAD (a client of mine's product) to a smart contract system that then automatically pays out to several independent competing companies as they plant and prove their tree planting efforts. The planters could be confident that the money is available to them and they'll receive payments within minutes of planting the trees, turning a 90 day receivable into instant payment. A tree planting company could be receiving money on the same day as planting, and then pay out a portion of their income to the independent contractors doing the work. This may seem like an accounting detail, but the ability to rapidly accelerate payment cycles is critical for many companies and organizations.

What are the carbon offsets from tree planting worth? In a world in which the location of the trees, or whether they exist at all is not known - a lot less than they would be with clear records and verifiability. A blockchain-backed system with clear proof creates new opportunities to evaluate carbon sinks according to their physical location, biome, methods of planting, etc. We could move from a world of rough estimates and fraud to one of precision, and at a lower price point because the people are replaced by predictable software. Better quality information means more valuable offsets, and more public support. It also creates the base for financialization because the records are already digitized and can be immediately integrated with trading systems. Imagine a climate bond that's securitized against digital information sources. Which one would you prefer as an investor? Securitization can also be sped up to create a shorter cycle between funding and action.

Tree planting is a familiar example but the applications of this extend to less clear activities that are no less essential for climate progress. For example, a sulphur dioxide scrubber could be linked to an IoT system to write desulphurization records that are then condensed to a hash and written periodically. This would enable new opportunities to spot fraud by environmental regulators by permitting analysis of the records after-the-fact in a way that prevents alteration. A system like this can't stop fraudulent records from being written, but an inspector could certify that a system works by observing the data over several days and then have a high confidence that anomalous records written later could be detected. This permits the linking of government initiatives to real reductions, and with stablecoins, even payment as sulphur dioxide is removed. Real-time progress, real-time payments. This is radically different than the blunt subsidies used today (and the accompanying fraud or lack of data that 20th century approaches suffered from.) The same technology that permits millions of dollars to be moved internationally by strangers in the Bitcoin system can now be used for environmental progress.

As with tree planting, the sulphur dioxide systems could be linked to trading markets for offset trading in near real-time. With proper inspections of the sources and regular writing of data to immutable blockchains we could enter a new era of reliable, dollar-denominated change.

Digitization also has potential equity benefits. A carbon offset project with IoT sensors backed by database + blockchain records located on a First Nation territory could have automated payouts to the community it's located on, the funders who made it possible, the government agency that subsidized it, and however many other stakeholders. Each stakeholder could see in near real-time not just what the value of their account is, but could actually withdraw the money in real-time using stablecoins. Daily payouts enables each stakeholder to participate directly and eliminates trust issues. A dollar in hand is the best proof. Proof creates trust, and might help overcome some of the historically rooted lack of trust that prevents cooperation.