May 6th, 2022 The Biggest Change to Ontario's Capital Markets Regulation In Decades: Impact On Crypto 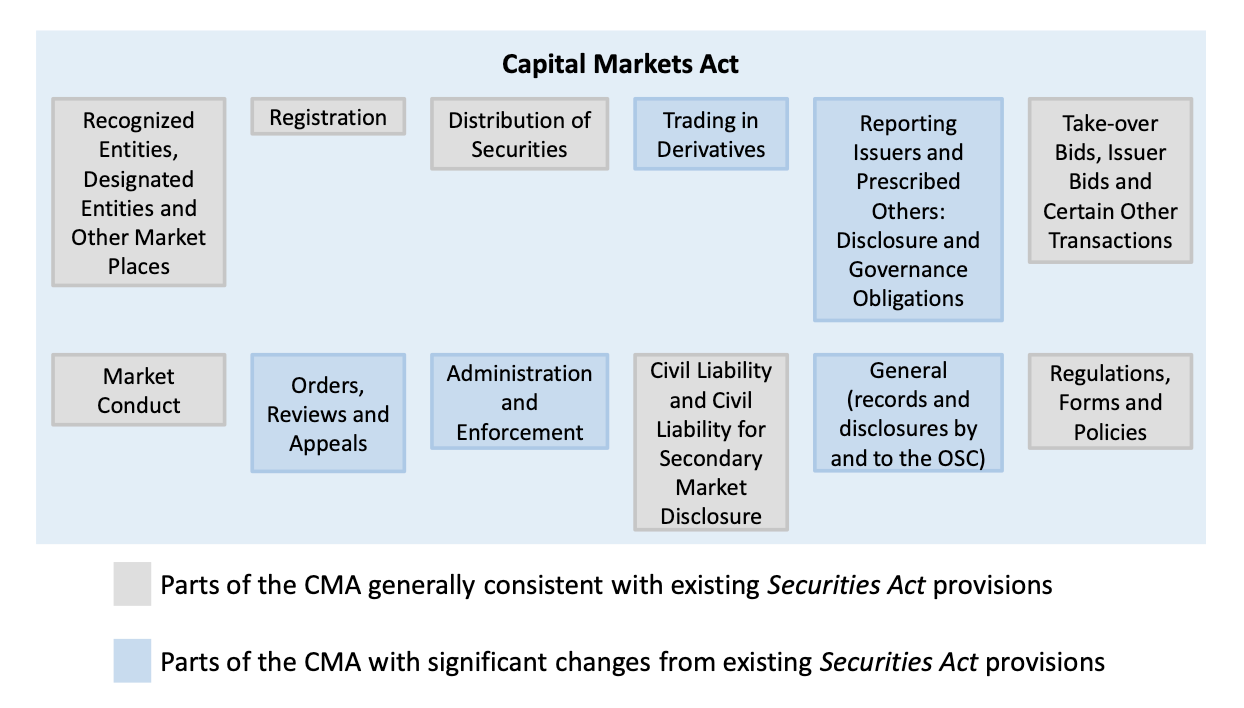 A draft law was published for comment by the Ministry of Finance in Ontario late last year, igniting a firestorm of criticism from the investment industry. Canada's crypto industry seems to have not noticed that the draft law would be an enormous change to how cryptocurrency and tokens are regulated in Ontario (and consequentially, Canada as a whole). This blog post explains the proposed law, why the investment industry doesn't like it, and what it might do to the nascent Canadian blockchain industry. The diagram above shows the areas of the Ontario Securities Act that have significant changes under the new Capital Markets Act.

It's worth noting that this proposed law has not yet been introduced into the legislature. It likely won't be until after the election that will be taking place this summer in Ontario, and if the Progressive Conservatives lose the election it's entirely possible that the next government will abandon the Capital Markets Act in favour of their own changes.

The draft law was published for comment in mid-October, 2021. It follows many of the recommendations from a "task force" of insiders that was formed to propose changes to Ontario's securities regulation. The law proposes to unite several disparate concepts in the investment industry and revamp securities regulation so that regulators can make rules more quickly and with less oversight. A good summary of the proposed law by law firm Aird & Berlis can be found here.

In a 41 page letter published by the law firm Davies (not known for hyperbole), their lawyers criticized the overall thrust of the law:

In our view, the platform approach taken in the Draft CMA affords the Ontario Securities Commission (the “Commission”) – and particularly the Chief Regulator – nearly unfettered discretion and facilitates legislation by regulatory fiat with limited political accountability. It also undermines one of the key features of a sound capital market, namely stability and predictability in the legal and regulatory regime that allows for transaction planning. With several key sections of the law proposed to be left to rules (some of which, we note, do not yet exist), there is significant risk of instability with the potential for substantive changes to be effected through a process subject to no more discipline than a 60-day request for comment.

Others in the investment industry have similarly harsh comments for the attempt to revamp the Securities Act but few have commented on the potential impact on cryptocurrency.

The origins of the provisions that affect cryptocurrency in the Capital Markets Act are page 56 of the task force report and the Restricted Dealer system that the Ontario Securities Commission (OSC) has introduced by exemptive relief without any changes to the statutory authority of the OSC. If passed, the law would likely be used to support the decision to create the Restricted Dealer system, thus giving statutory support to something the OSC began doing last year. This would protect the OSC from the risk that their moves to regulate virtual currency dealers in Canada as securities dealer (by way of 2020's CSA Staff Notice 21-327) may not be upheld by a court if challenged.

The law proposes to give the Chief Regulator (at the OSC) to declare that a "crypto asset" is a security. Once deemed, the "crypto asset" would be a security and then only securities dealers can deal in that crypto asset. The definition of "crypto asset" is ... a digital representation of value or contractual rights, which may be transferred and stored electronically, using distributed ledger or similar technology (section 3 of the Capital Markets Act). The key to the definition is "contractual rights" because that's where CSA 21-327 comes in. The Ontario Securities Commission is of the view that the method of selling virtual currency used by most dealers and exchanges creates a contractual right to cryptocurrency which is independent of the cryptocurrency itself, and the Capital Markets Act would allow them to back up this opinion by an enforceable declaration that they are securities, rather than a legal interpretation that they are.

The law also permits designation as derivatives but the result of this is very similar as a designation that it is a security. The definition of security is quite different from the existing Securities Act by adding "crypto asset" to the definition:

18. A crypto asset – other than one that falls within paragraphs 1 to 17 – that is designated, or is within a class of crypto assets that are designated, under subsection 127 (2) to be a security.

19. A crypto asset – other than one that falls within paragraphs 1 to 17 – that is within a class of crypto assets that are prescribed to be a security ...

The Consultation Commentary that accompanied the draft law describes the changes that affect crypto markets as:

The OSC, in partnership with other capital markets regulators across Canada, is addressing issues relating to crypto asset trading platforms’ compliance with capital markets law. In March 2021, as a follow-up to previous publications, the CSA and the Investment Industry Regulatory Organization of Canada (IIROC) published a notice providing guidance on the requirements that apply to crypto asset trading platforms. The OSC also issued a notice for all crypto asset trading platforms to begin discussions on bringing their operations into compliance. Since then, the OSC has initiated enforcement proceedings against non-compliant platforms. Providing the OSC with designation powers and rule-making authority for crypto assets that are not already securities or derivatives would allow the OSC to tailor requirements to new platforms and assets.

These powers would need to be exercised selectively. While there may be a benefit from OSC regulatory oversight of certain financial assets such as crypto assets that are not already securities or derivatives, there could be other assets or business models that raise fewer investor protection concerns and would not warrant regulatory oversight by the OSC.

The Restricted Dealer system for regulating virtual currency dealers, unsupported by statutory/regulatory changes, is moving forward but is still subject to challenge. If/when the statute is changed to the Capital Markets Act approach of permitting the OSC to deem securities/derivatives then this challenge will become much more difficult. Although there might be a benefit to the "certainty" that this would provide, it's not likely to be of much benefit since most platforms are already moving forward under the Restricted Dealer approach. Certainty is often a claimed benefit of new laws in the securities space but a law that permits quick designation by a regulator without going through the normal law-making process is not compatible with certainty. The Capital Markets Act does not seem to have any benefits to the cryptocurrency industry, not even for the virtual currency dealers that have registered or are in the process of registering as Restricted Dealers.