Thoughts and opinions of a Toronto-based cryptocurrency lawyer who's worked in the industry since 2014.

A Glimpse of a Global Future of Law Practice

A little while ago I had a Skype consultation with an Italian entrepreneur who had a problem with a German software developer. I asked what the problem had to do with Canada and he said nothing. I asked why he wanted to hire me and he said that he'd done extensive research online and thought that I was the best person for the job.

The potential client had a problem and they wanted someone who knew about contracts, law and software to help them out. They didn't think of their problem as an Italian problem or a Swiss problem.*

Global-Regulation.com (I'm the CTO) has published a list of the top word pairs found in global laws. The Excel file can be downloaded here.

I've looked through the top 500 words and taken note below of some of the more interesting word pairs.

A "Decentralized autonomous organization ('DAO')" white paper has been published by German blockchain company Slock.it UG. This white paper is part of a larger conversation that's been going on for a few years in the Bitcoin/blockchain world. The basic idea is to build a software program that runs like a company, but on a decentralized software platform (e.g. Ethereum). Slock.it's paper is one of the longer contributions to this effort (31 pages, including code examples).

This blog post details a few thoughts on the Slock.it proposal, from a lawyer's point of view.

Canada's equivalent of the NSA, CSEC, is always on the hunt for new talent. There's a job listing today for a "Telecom Technologist & Network Analyst". One of the job requirements: “Experience in administration of remote network endpoints where there is little to no assistance at the remote end.” I wouldn't expect too much help from the other end when you're doing foreign signals intelligence.

The pay for CSEC jobs is surprisingly good for Ottawa civil service but probably not competitive with the private sector right now. Posted salaries for experienced people range from $70k-$100k. Most private sector jobs for similar roles don't have posted salaries but appear to be about $30k/yr higher.

Food for Thought from CIGI Roundtable on Blockchain Regulation

Last week I attended a roundtable put on by CIGI in Toronto titled “Regulating Blockchain & Distributed Ledger Technologies: Challenges and Opportunities for Canadian Innovation”. Speakers included key people from industry, government and academia. I've distilled my notes about speakers' thoughts and my own reflections into 18 questions. Please note that the roundtable was conducted under a rule of not crediting speakers - the thoughts below are mostly not my own.

Effect of Interveners at the Supreme Court of Canada

The presence of interveners doesn't seem to affect an appellant's chance of success at the Supreme Court of Canada.

I took a look at 844 recent Supreme Court of Canada cases that proceeded to the stage in which there was an appellant (as opposed to applicant). There doesn't seem to be any discernible pattern in the data.

I've analysed 1871 Supreme Court of Canada factums (88902 pages in total) to determine statistical information about factums for appellants, respondents and other parties (i.e. intervenors). This analysis was done using a program.

The Canada Business Corporations Act requires that companies hold regular shareholder meetings but the statute allows companies to dispense with the requirement of physical meetings by using written resolutions instead (s. 142(b)).

Free Shipping from Shenzhen to Toronto: How?

The foot pad on my Macbook Pro Retina fell off the other day. The Apple Store didn't have a replacement part but an eBay seller in Shenzhen, China did. For $3 with free shipping.

The cheapest international shipping option with Canada Post is $5.35 for up to 100g (without tracking). How can a store in China sell me anything for $3, including shipping?

The CEO of BlackBerry blogged last week about how “our privacy commitment does not extend to criminals”. He accused Apple of placing “their [reputation] above the greater good” when the company explained to a court why they can't and shouldn't provide access to encrypted iOS devices.

John Chen would like companies to go beyond the law and do what's “ethical”, citing the responsibility of citizens to “help thwart crime when they can safely do so”.

CanLII's robots.txt file provides preferential access to its database of laws & cases to users of Google vs. other search engines. This blog post explains how they're doing it and why that is inconsistent with CanLII's privileged position in the Canadian legal publishing landscape.

As a preface to this post: I'm a big fan of CanLII's service and use it regularly for my legal practice. Just because something is great doesn't mean it can't be better.

Which lawyers have represented the most number of clients before the Supreme Court of Canada in recent years?

In order to answer this question I analysed the most recent 6984 cases before the Supreme Court of Canada (approximately ten years of cases) and extracted the named counsel for each case. The results are given below.

Google To Start Supporting (Some) Youtubers Fair Use Cases

Google announced last week that they will start defending some of their users in court when "fair use" ("fair dealing" in Canada) is at stake.

Google is promising to, with consent of the video creator, “keep the videos live on YouTube in the U.S., feature them in the YouTube Copyright Center as strong examples of fair use, and cover the cost of any copyright lawsuits brought against them.”. Although this will only be for a “small number of videos”, this is a big step forward for fair use/fair dealing. Establishing important precedents in favour of creators will help the public and YouTube.

Continuing my work on Supreme Court data mining, I've extracted the firm names from the last ~7000 Supreme Court of Canada cases (going back about 10 years). This analysis was done by taking the first line of the address for each party, which is almost always the firm name. Below are the top 14 firms + the Attorney General of Canada.

How Not To Update A Terms Of Use Agreement

Uber B.V. (the Dutch company that licenses the Uber application to end users) changed their "Terms of Use" agreement in Canada on November 19th. I was notified of this by an email from Uber Canada (shown below). 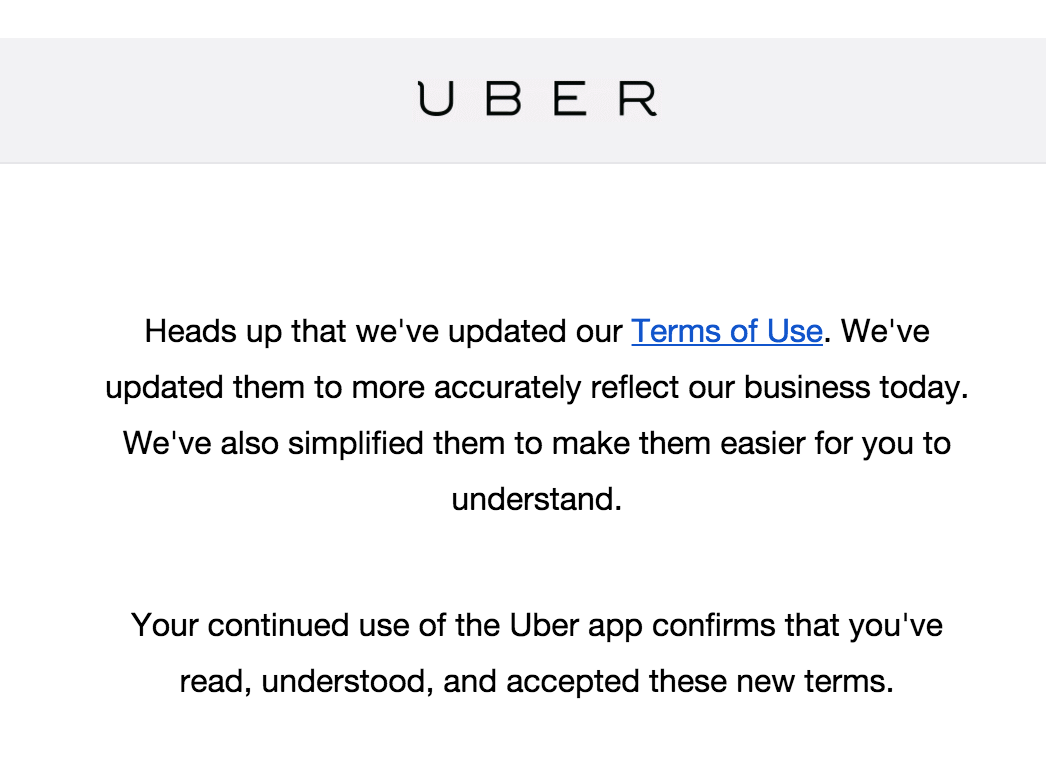 The Marketplace Model: A Huge Win Courtesy of Uber Canada

I often advise startups about running what I term "marketplace" businesses. That is, companies that connect customers with other businesses on a digital platform. The key challenge for these businesses is not being seen as the entity making the sale but rather as the entity connecting two independent entities (customer and supplier). These businesses are at the cutting edge of a change in the way that business is done as we move ever more towards a world of smartphones, contracting and reduced transaction costs. Uber is the most prominent of this new breed of startups.

This past summer's case of City of Toronto v Uber Canada Inc. et al., 2015 ONSC 3572, 126 O.R. (3d) is an incredible win for this business model and should encourage anyone interested in exploring marketplaces. Why is this case important?

SecondMarket has been acquired by NASDAQ.

SecondMarket is the main tech company private share marketplace in the US. I wonder if NASDAQ plans on expanding its presence in other markets.

New Zealand Does Not Allow You To Explode Nuclear Weapons

New Zealand has an interesting offence on the books:

Ontario to Allow Limited Sales of Beer in Grocery Stores

Ontario grocery stores will be allowed to sell up to 46 million six-packs of beer per year in Ontario, according to the Toronto Star. This sounds like a lot of beer but according to the beer trade association, Beer Canada, Ontarians purchased 7.9 million hectolitres of beer in 2014 (790,000,000 litres of beer).