Thoughts and opinions of a Toronto-based cryptocurrency lawyer who's worked in the industry since 2014.

One of the first applications of Bitcoin was online gambling because gambling companies have a hard time with a) chargebacks; and, b) the legality of their services. The earlier pioneers in Bitcoin gambling all suffered from a problem of centralization: there was always a single website that gamblers had to use and trust. Recent innovations like Augur and Ethereum are changing the dynamic.

A new service called Augur (built on top of Ethereum) has been getting a lot of media attention and apparently racing bookies are concerned: http://www.racingpost.com/news/horse-racing/tom-kerr-augur-could-become-racing-s-worst-nightmare/1953992.

As a lawyer and programmer I have long thought it would be useful to have a search engine for world laws. I run several specialized legal/legislative information services (e.g. OntarioMonitor.ca) that have taught me quite a bit about how hard it is to gather legal information and present it to users. After years of consideration and many months of hard work I'm pleased to announce the launch of Global-Regulation.com.

Global-Regulation is a law search engine that currently has a database of 212,000 laws from all over the world (some are machine translated from China, French and German). Searching this 12 gigabyte database of laws takes seconds because of a dedicated in-RAM search application that is in front of the MySQL database (hosted on Google Cloud for speed, redundancy and ease of scaling). If the current database were printed out it would be approximately 7 million pages (and completely unusable).

MIT and Boston University are teaming up to open a new legal clinic to assist students with innovation issues. The clinic is partly a response to the suicide of Aaron Swartz following prosecution for mass downloading journal articles at MIT.

Let's say I have a company that sells gravel in Canada. I buy gravel wholesale for $500 per ton then sell it retail at $1000 a ton. I make approximately $500 per ton in profit. That means I would have to pay corporate tax on the $500 per ton in profit (assuming I had no other costs). What if I set up an offshore subsidiary (e.g. Cayman Islands) that buys the gravel from my supplier for $500 per ton then sells it to me for $1000 per ton and then I sell it to the customer for $1000 per ton? If that were possible, I'd effectively shift the profit I make from gravel sales from Canada to a no-tax offshore country and thus escape corporate tax while still making just as much money (and if I had any other costs, I'd then have a loss that I could apply to past year's gains).

"Transfer pricing" is the term given to the price set between related entities (e.g. a Canadian company and its Cayman Islands subsidiary). The rules for how companies can set their prices internally are complicated but attempt to stop would-be tax cheats from moving profit from one country (that has taxes) to another country (that doesn't, or has very low taxes). A key principle is that the price that a company should pay to its subsidiary is the price that they would pay an "arms-length" company. This principle is hard to apply and the rules create opportunities to pay very little tax on very large sales.

Blog Traffic Since I Started My Law Practice

I started my law practice in July of 2013 and immediately began blogging. In the first full month of my practice my law blog received 80 visitors. Two years later, my blog receives around 1100 visitors a month. 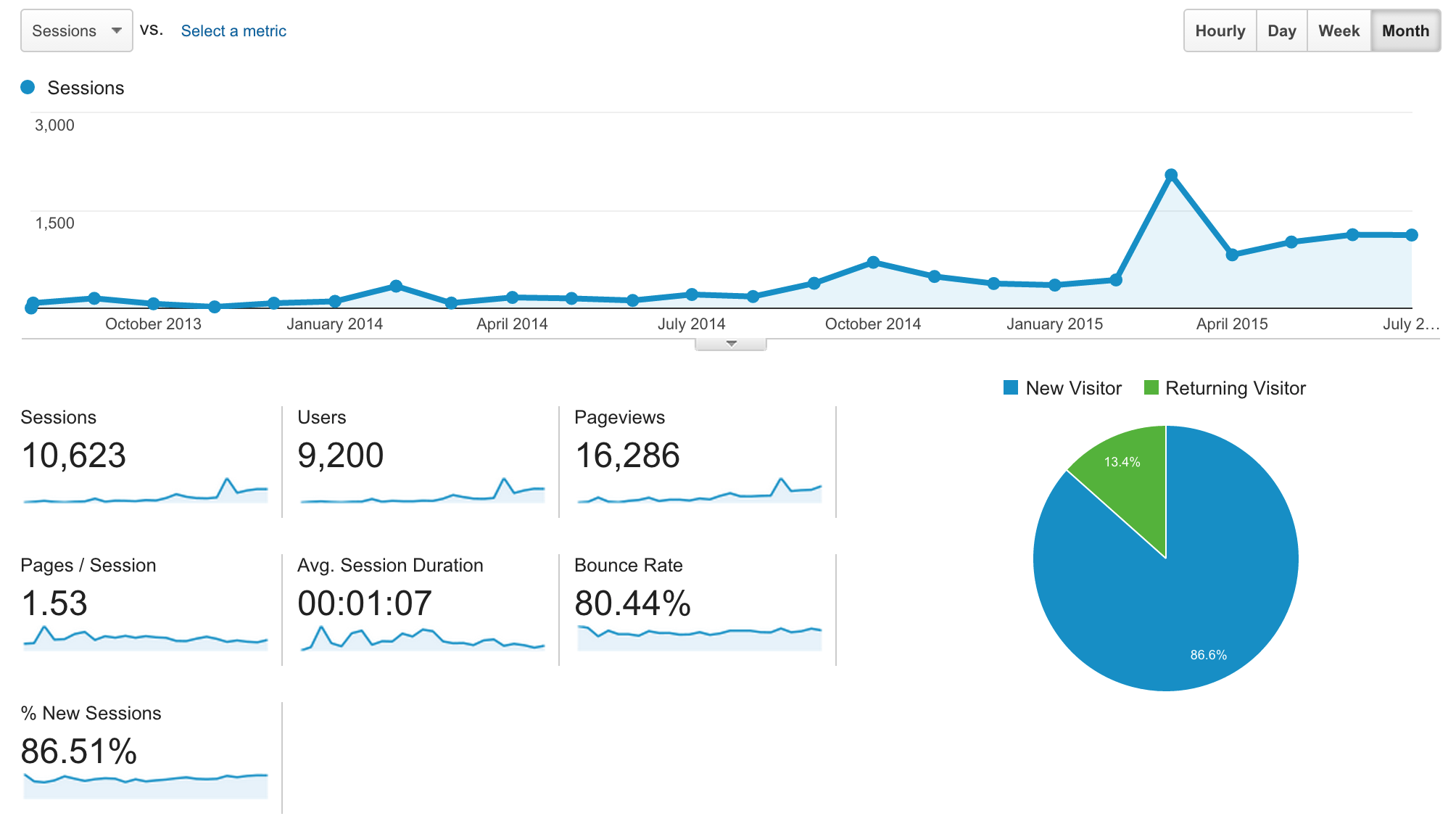 Bitfinex's move comes following outcry when the new regulations were first announced. Businesses complained that they'd be forced to leave New York due to high compliance costs and it seems they were right. That said, Bitfinex is a Hong Kong-managed British Virgin Islands company so this isn't a case of a domestic company being forced to leave.

Running Ethereum on a Mac

Ethereum launched today just before noon EST. Here are the steps to follow in order to get it set up on your Mac:

1. Open up the Terminal

Before starting my law practice I ran a consulting programming business for many years. Since starting my practice I've assisted a number of web development agencies (and independent programmers) get off the ground/upgrade their contracting processes.

A rough overview to starting a web development/digital marketing agency: 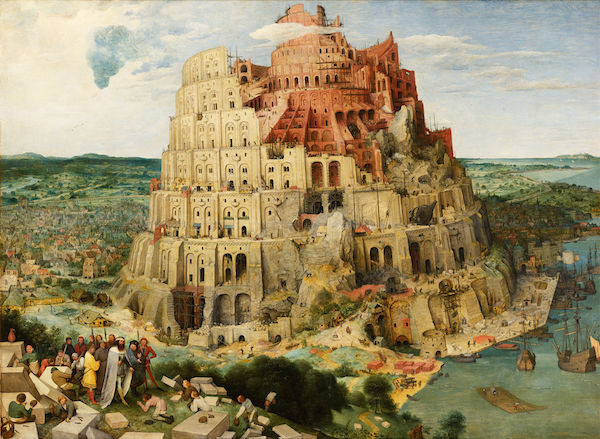 More and more countries are hosting laws online. Machine translation gets better by the day. When will we have access to all of the world's laws translated into the languages of the world?

I think 3D printing is the future for cases that involve construction. Although insiders may understand floor plans, seeing a physical model of the building as it will be is powerful. Below are a few photos of a 3D printed model for a case that I recently worked on. It was the first 3D model that the expert planner, who's been in the business for 30 years, had seen (and they got a copy of the model too). 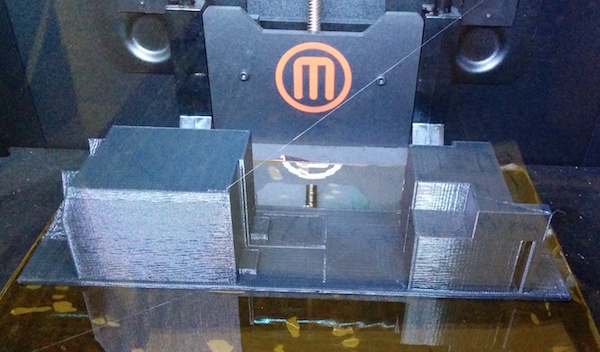 Buying a "Pint" in Ontario

A bar near my house recently started selling "pints" in 16 oz. glasses. What should you be getting in Ontario when you order a "pint"?

According to the Weights and Measures Act:

If you're interested in building your own service that uses automatic translation then there are two big players in the space: Google and Microsoft. Both offer similar APIs although at slightly different price points and different technical limitations.

Becoming a Contract Programmer in Canada

I work for agencies and independent programmers who offer consulting services. Before becoming a lawyer I did freelance web development. This is an overview to the steps required to start a business doing contract programming.

Step 0) Learn how to program and develop your skills to a point at which people would like to pay you to program for them.

Queen's Law held a panel discussion last week on the topic of AI and law. A recording of the discussion and a summary will be made available in the fall. In the meantime, here are my prepared remarks. The actual discussion ended up covering different ground than the questions that were distributed ahead of time and my fellow panelists had a lot to add. I'll post a link to the discussion when Queen's does.

The other panelists were Janet Fuhrer, Jeff Fung and Jordan Furlong. The moderator was Professor Cockfield with assistance from Lisa Graham and John Neufeld.

What Does A Bitcoin Lawyer Do?

My business cards say "Technology Lawyer" not "Bitcoin Lawyer" but Bitcoin-related work was approximately 60% of my legal practice last year.

In the last year I've spoken about Bitcoin and law in front of 300+ Canadian Corporate Counsel Association lawyers, a roomful of banking lawyers at the Canadian Institute's Payments Forum and at other smaller events. I'm often asked "what do you do for your clients?".

I'd like a time-tracking service like Toggl (Internet-based and works well on mobile and desktop). But I'm a lawyer so I don't want to store confidential client information on a service like that, so it would need to be client-side encrypted. I'd also like the software to tell me about opportunities to generate additional business (i.e. make more money).

Client-side encryption can now be done on most browsers using the WebCryptoAPI (although implementation is a challenge for developers). My ideal service would encrypt all of my data client-side with AES and then upload it to the time-tracking system. When I access the service it decrypts locally to show me my information.

Predicting Whether a Bill Will Receive Royal Assent

OntarioMonitor has undergone a major rewrite that allows for a huge number of new features. One of those features is "bill prediction", accurately guessing whether a newly introduced bill will receive royal assent.

You can read more about the new feature and the 82-91% accurate results here: http://www.ontariomonitor.ca/blog/predicting-whether-a-bill-will-pass-in-Ontario/index.html.

CBC interviewed me for a segment on Nintendo asking for a cut of ad revenue generated by "Let's Play" videos. 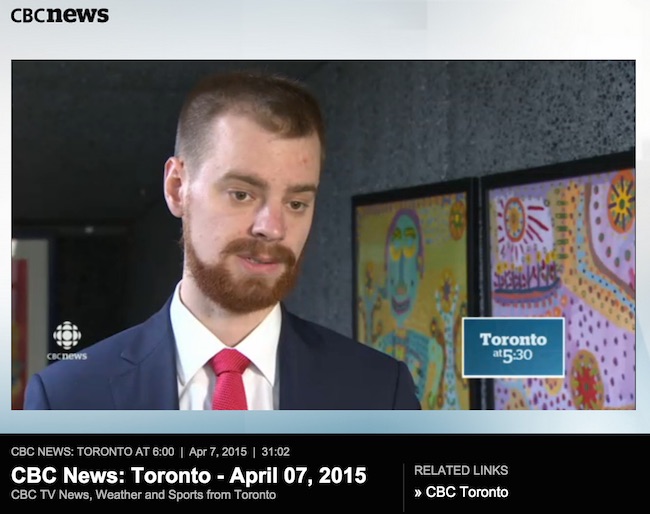 IRS & CRA Should Cheer for Uber

The CRA and IRS should be the biggest champions of the "sharing economy". Why? Because the sharing economy means the taxable economy.

Uber is solving a problem its founders never intended to solve that it gets no recognition for: untaxed taxi transactions.

Nintendo is taking another stab at using YouTube's Content ID system to claim part of the advertising revenue of "let's play" videos that feature its games: http://www.wired.com/2015/03/nintendo-youtube-creators/. Where do content creators stand when it comes to Canadian copyright law and claims by video game companies?

For Canadian content creators there are three key legal sources: